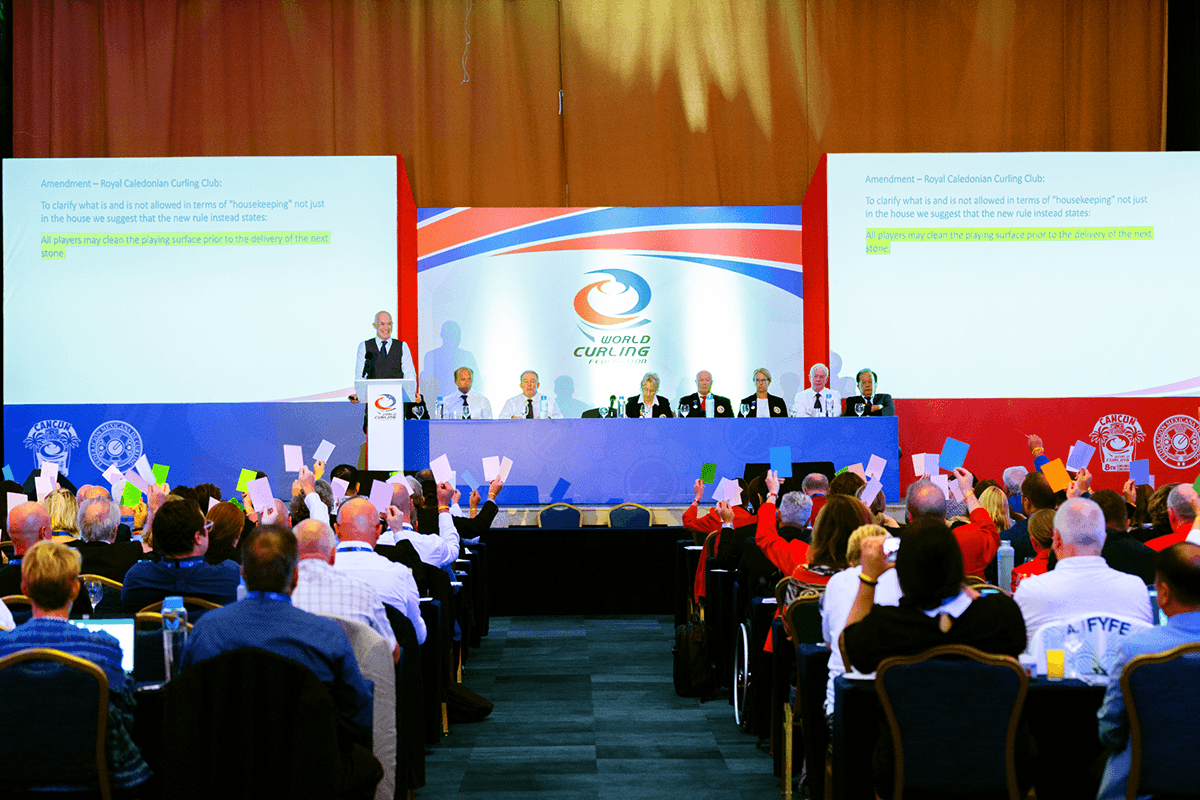 The World Curling Congress 2019 was held in Cancun, Mexico, last week. WCF presented the results and reports from last season as well as its plans for the coming seasons. Also, the Annual General Assembly (AGA) voted on several rule changes and clarifications and postponed the decision with regard to the length of the games.

The AGA has voted on the format of two world mixed doubles curling competitions. In the World Mixed Doubles Qualification Event (WMDQE), if the number of teams is fewer than 16, a single round-robin will be played to determine the top 4 teams, which are qualified for the World Mixed Doubles Curling Championship (WMDCC). If there are more than 16 teams, then they will be divided into four groups, in which a single round-robin will be played. The top 2 teams from each group will advance to the playoff, where a double knock-out system will be used to qualify the 4 teams for the next WMDCC.

The AGA has voted on various rule changes and clarifications. One of the hottest topics this year was the length of the games. However, the AGA decided to continue assessing the proposal in the coming seasons and would not make the final voting until AGA 2021.

With regard to Olympic qualification systems, while the AGA has agreed upon what states in the rule book, the qualification system will be agreed between the IOC and the WCF, and it will be published on the WCF website as soon as it is approved by the IOC.

WCF introduced the new world team ranking system. In addition to the WCF World Rankings for Member Associations, individual teams will be ranked by this new World Team Ranking system. This system will be administered by CurlingZone. For more details please see here。

WCF is currently developing an online curling education platform, called World Curling Academy. It will offer online courses for coaches and umpires, which will replace WCF’s in-person courses hosted in Germany in the past years except the ice-making course. The new website will by launched in the coming weeks. Stay tuned!

Moreover, WCF and Rock Solid Productions also extend their partnership in development. While they will continue to use floor curling to promote curling, a series of videos will be produced for the online courses.

I threw a takeout at curling on Tuesday night, and as I kicked out of the hack, Kenny Loggins’s “Danger Zone” started to play. Why can’t that always happen? #curling #dangerzone